5 Easy Ways to be a More Productive Writer 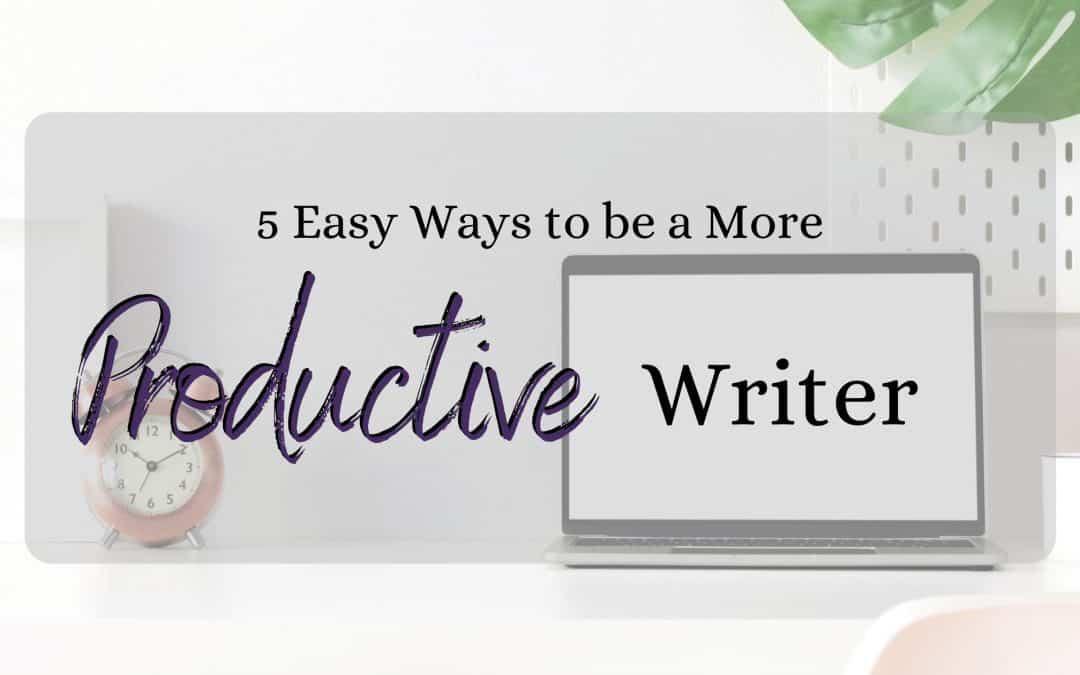 We’ve all been there. You have laundry to do; the dishes are piling up; there’s a great show on TV that you just can’t bear to miss; all while your computer is blinking that frustrating text cursor on a blank screen.

You have writing to do.

You know it. The universe knows it. Even your dog knows it. But for some unknown reason, you keep finding yourself doing other things besides writing. If you find you aren’t getting work done in a fast and efficient manner, you may need a productivity reboot.

Below, I have 5 proven tips that will help you get yourself back on track and be a more productive writer.

Distractions are the enemy of any productive endeavor. And the worse part is that they show up unannounced and uninvited just when you sit yourself down to get something important accomplished.

If distraction is a common problem for you, it’s time to take control of your work environment.

Stop expecting the world to let you focus. It won’t.

Instead, take the time to create the type of environment that cultivates focus and productivity. Find yourself a comfortable (but not too comfortable) area in your house or office and make sure it has good lighting. Then, turn off your phone, get the kids a babysitter, put on headphones that play the type of music that helps you concentrate, block the internet and anything else you have to do to keep yourself from getting distracted.

Remember, you are in charge of your own mind. Set yourself up to stay in control of what it focuses on.

If you still catch yourself drifting off task, stop and take stock of why this is happening. Is there more that you can prepare for? Do you need a snack or a coffee? Set these things up for yourself ahead of time so you have no excuse to get up and avoid the task at hand. 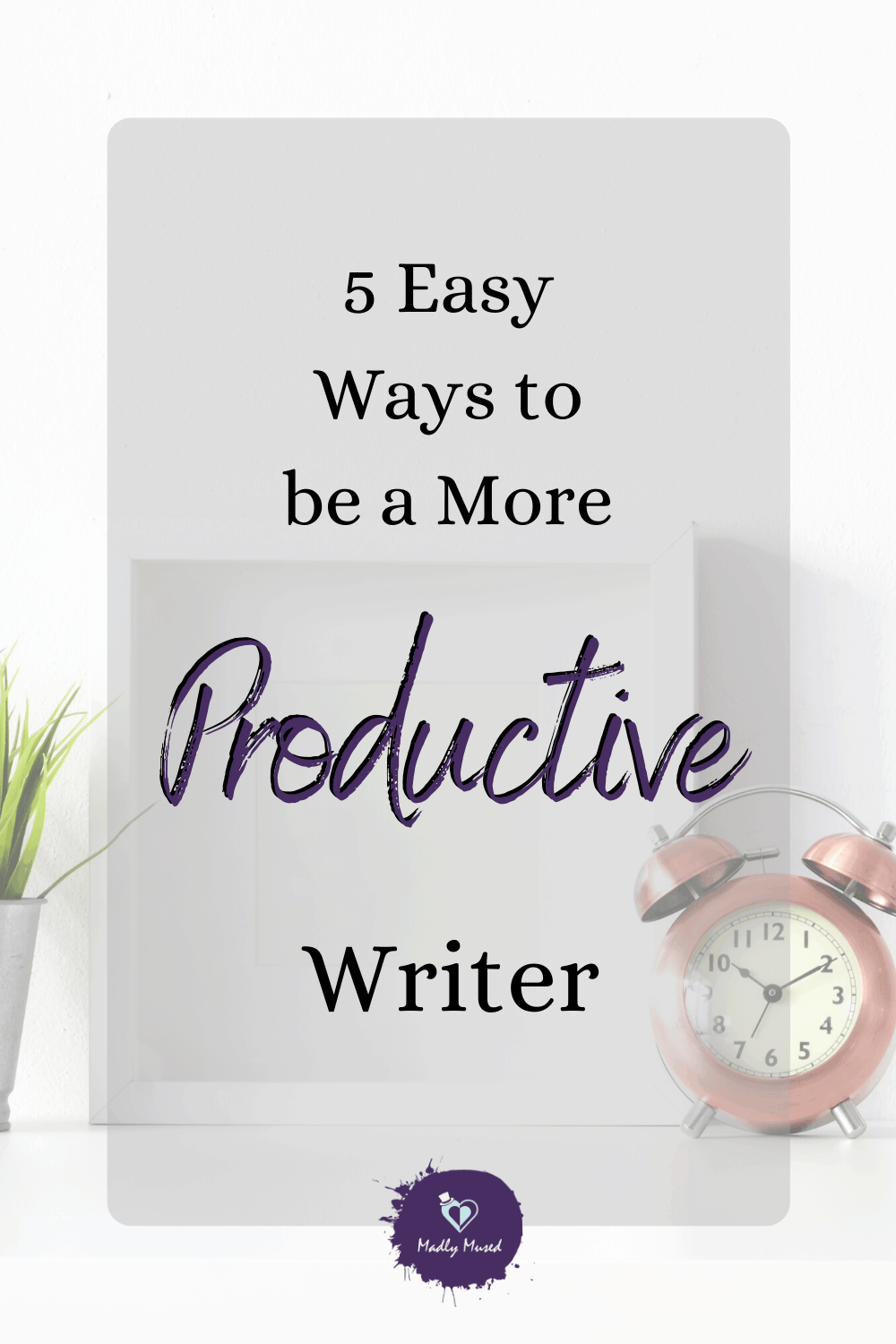 2. Block and schedule your time

The most productive writers schedule time for writing. It goes on their calendar like an appointment they have set with themselves, and they always make their appointments.

If you want to produce high quality writing, then you must write regularly, and that means that you must make time for it, just like you would a regular job. Stephen Pressfield writes about this in his book “The War of Art.” He refers to the act of setting your schedule and showing up every day to write as “Turning Pro.” If you want to be a productive writer, you must turn pro.

Another important thing that productive individuals do is practice time blocking. Time blocking means you set up your schedule so you complete similar tasks together. This keeps your brain engaged on one type of thing at a time and reduces the focus lag that happens when your brain has to switch from task to task. It’s the opposite of multitasking. Studies have proven that those who time block rather than multitask actually get more done in the same time.

Writers can do this too and increase the odds of finding their “flow” during a typical workday. To take advantage of this, time block as you make your work schedule. Set aside a specific time for research, a specific time for brainstorming new ideas, time for actual writing and time for editing what you have written.

Then stick to that schedule at all costs.

Even if you feel you don’t have enough information to get started, when it’s time to move to the writing time block, do it anyway. You will go back later to edit your work, and you can smooth out issues at that time. And on that note…

3. Stop editing as you write

This was one of my worst habits. I have a novel I have been working on for several years, and I would have finished it much sooner if I had just stopped trying to edit as I was writing. It’s a terrible habit that I had to learn from the hard way.

One of the worst things I did, and the reason it took me so long to finish this one story was that as I was writing the initial draft, I would realize that I wanted a detail to be different in one part of the story. Instead of making a note of this detail for my future self to use while editing, I would go back to make sure that the new detail made sense in earlier chapters. This led to rewriting chapters that I had already written multiple times, all because I wanted to smooth out this one little detail later on in the story. When I finally got back to the chapter that had caused the disruption, I would often only get a little further before I discovered ANOTHER detail that needed to be worked in and I would go back and repeat the entire process AGAIN!

I wish someone had taken me by the shoulders back then, shook me really hard, and told me about how bad this was for my writing productivity. It wasn’t until I read “War of Art” by Stephen Pressfield, and “On Writing” by Stephen King, that I actually realized how badly I was sabotaging myself. After years of getting nowhere fast, I finally fixed the habit. Now, I cringe to think about how much I could have accomplished in all the years I have been writing if I had just followed this one tip.

So, as tempting as it is to reread your work and edit as you go, just don’t do it. Write the entire book, article, story, or piece and then go back and edit what you have written during the “Editing” time block you have already set aside. You will thank yourself when you have an actual finished product rather than a carefully edited fraction of a project.

Plus, finishing the piece will give you a better idea of the bigger picture and show you which edits you should actually focus on and which ones you should let go of.

Want to get extra tips and updates on new blog posts??

4. Always have a way to record your ideas

Ideas come during all hours of the day and night. I come up with some of my best ideas while running errands or in the middle of a workout. As a creative, you have to be ready for these ideas at all times because you never know what everyday detail or interaction might inspire you.

I have seen many creative individuals who will spend hours trying to come up with new ideas or recall ideas they let slip by them, all because they didn’t take the time to write them down in the moment.

I recommend that you keep a notebook or other note-taking tool with you at all times to capture these ideas when they show up. That way you can refer to them later when you are actually ready to write.

We live in a great age where we have mini computers with us all day in our pockets. Our phones are excellent tools for note-taking. I have a Galaxy Note phone that allows me to write notes directly on the screen with a stylus and save them for later. This is perfect for me because I hand-write much faster than I text and this allows me to capture spontaneous ideas quickly, while I’m on the go.

Find the method that works best for you and make it happen. You will be so glad that you don’t have to waste time later trying to recall those amazing ideas that you let slip away. 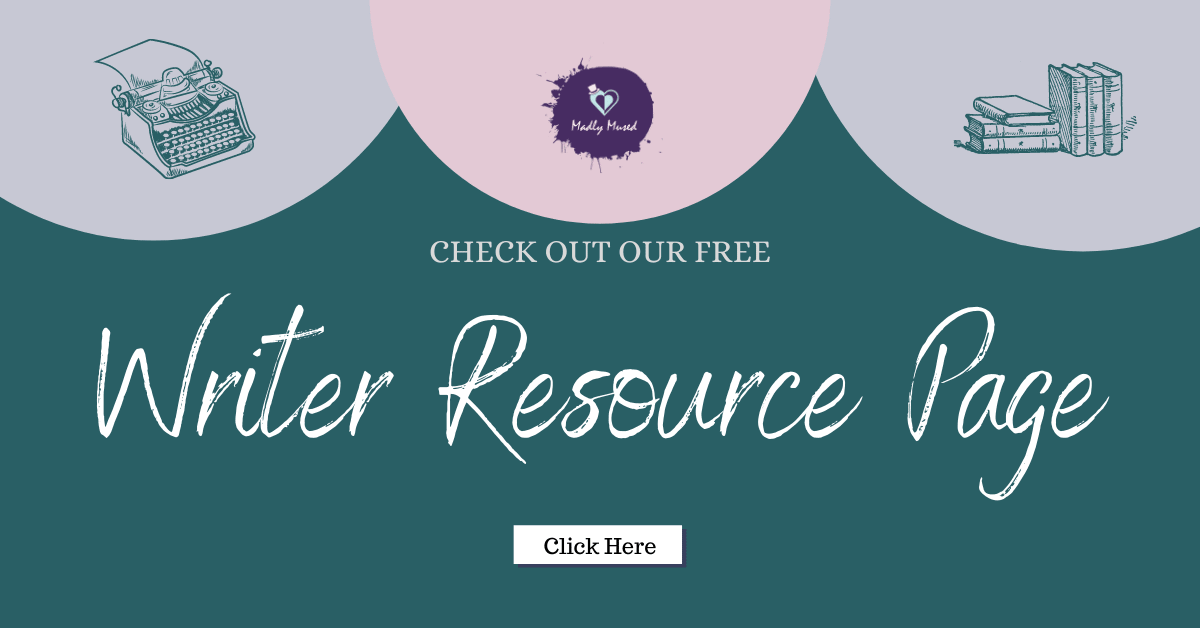 5. Prioritize your mental and physical health

You cannot be at your best in writing or any other endeavor when you feel like crap. Your mind and your body work best when you are healthy. Don’t ignore your physical or mental health in the moment so you can “get things done.”

I promise you will be way more productive when you feel your best.

This means, you need to exercise, drink lots of water, take breaks periodically, eat foods that are good for you, and get enough sleep. This may also mean that you need to practice calming techniques like meditation or yoga or even schedule time to talk to a therapist and work through things that are bothering you and blocking your creativity.

Take some time to discover what actions will help you stay in good health and then make those activities a routine. Once you find something that promotes your health and leaves you feeling energized, schedule that thing into your life so it can become a daily or weekly habit.

If you would like more information on building good habits as a writer, artist, or other creative individual, let me know in the comments and I will try to add that to my list of topics to include in this blog.

Being a productive writer is all about making choices to promote good habits in your writing career.

You need to take control of your environment and eliminate distractions from your workday. You also need to schedule and block your time effectively so you can get more done in the time that you have and then stick to that schedule instead of editing your work as you go. You need to prepare yourself to record new ideas as they come. And, most importantly, you need to prioritize your health so you can sustain your writing career for many years to come.

Was this post helpful to you? Are there any tips you have discovered in your own writing practice that have helped improve your productivity? I want to hear about them! Please let me know how you stay productive in the comment section. 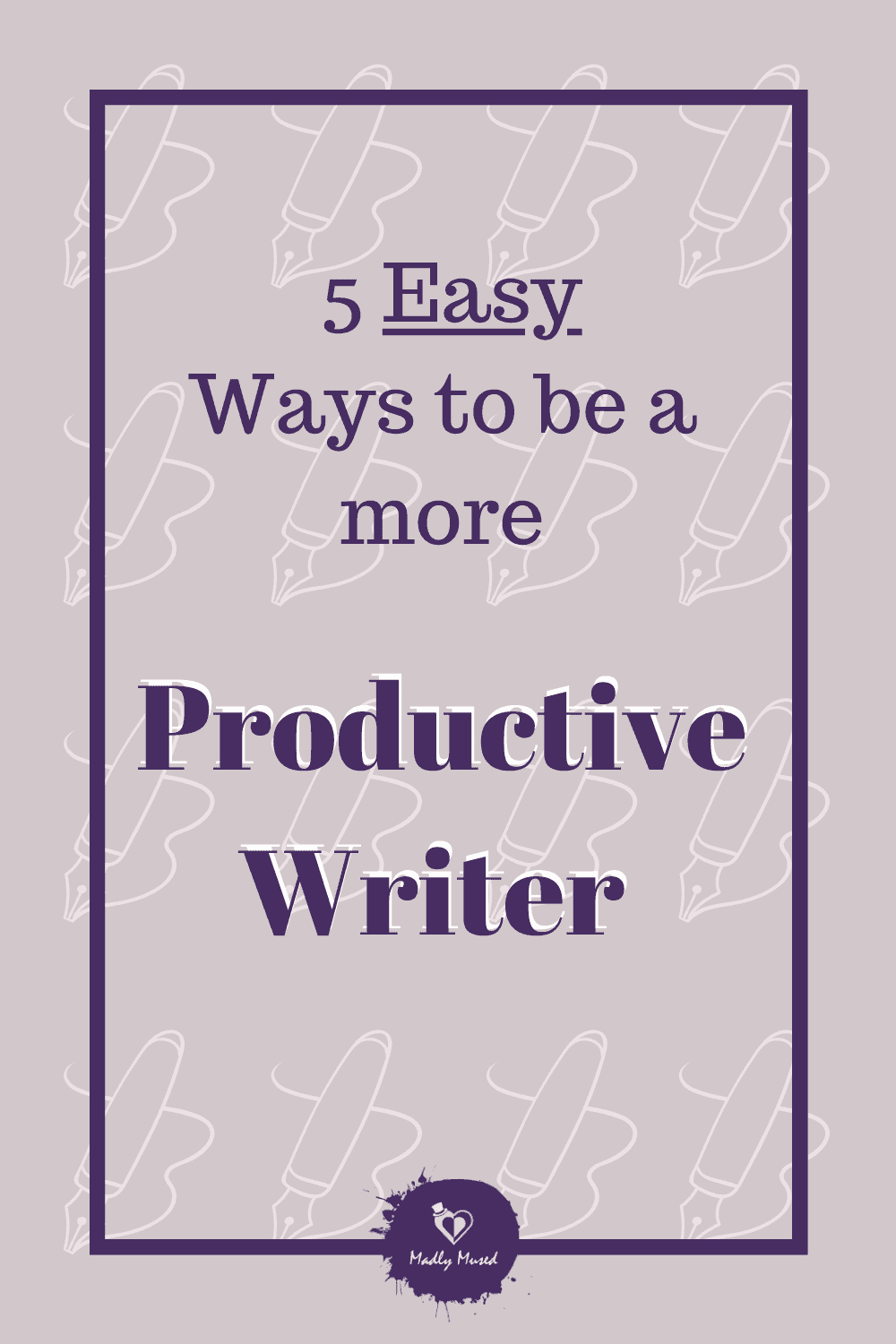 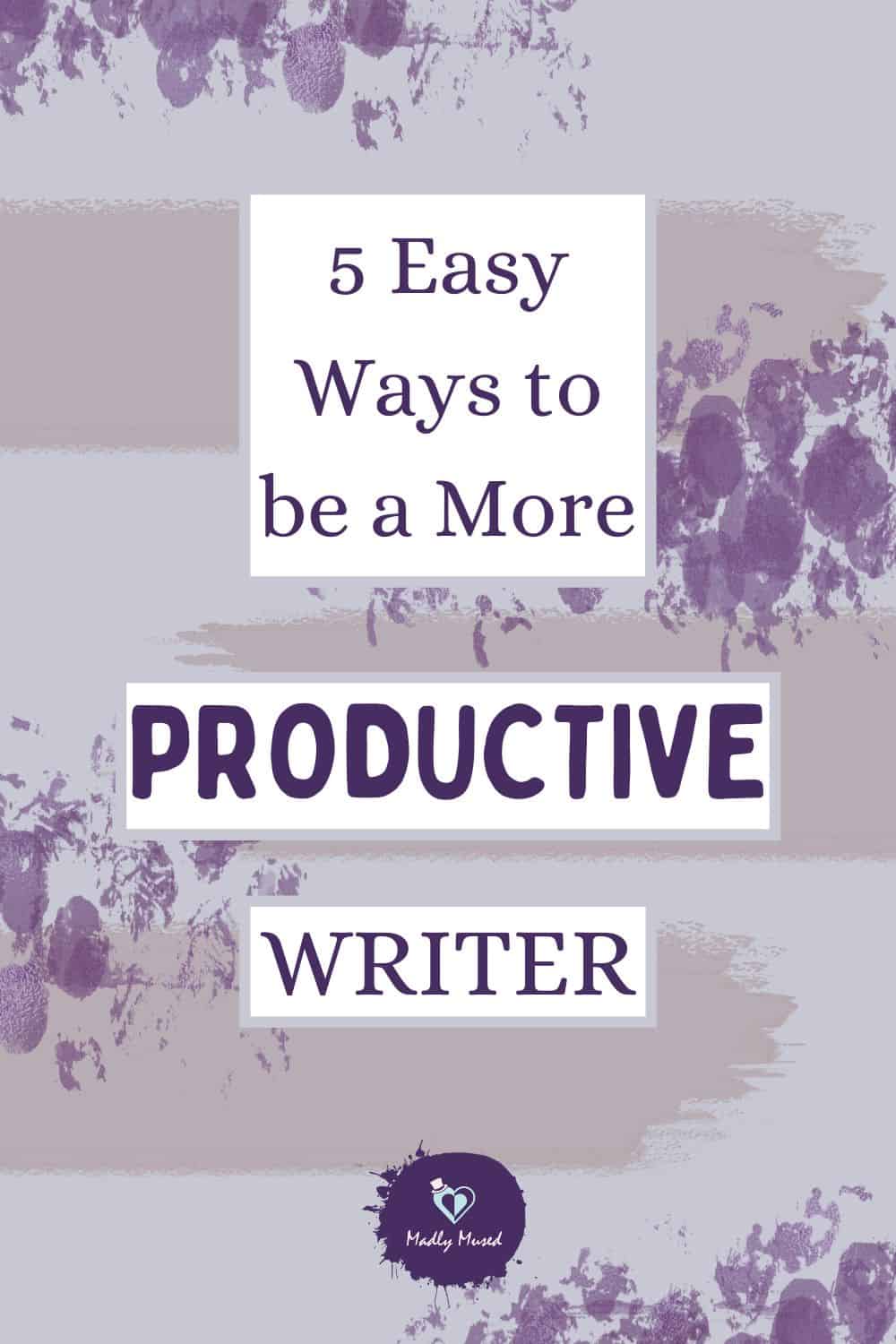 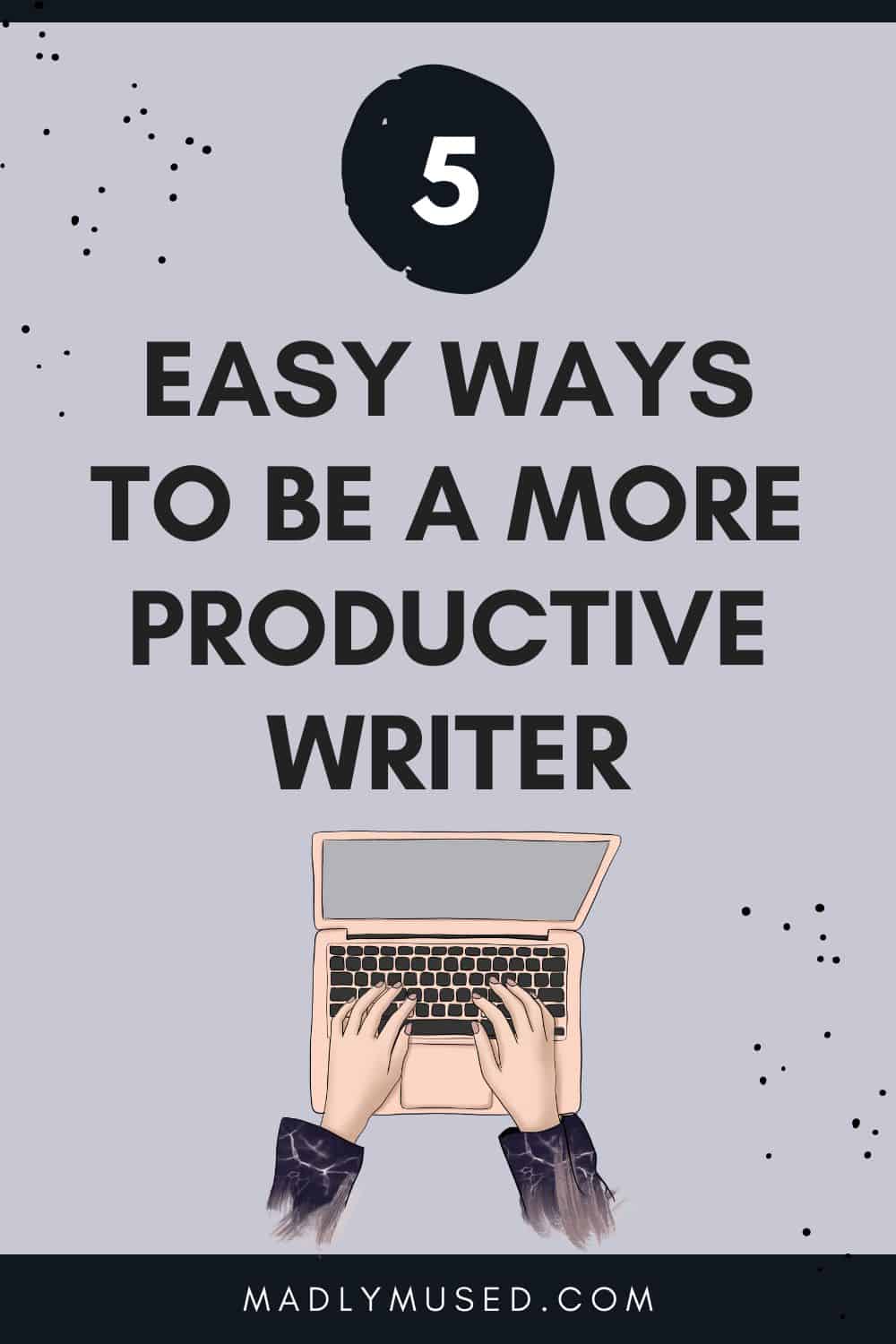 This site uses Akismet to reduce spam. Learn how your comment data is processed.

Get Your FREE Business Checklist! 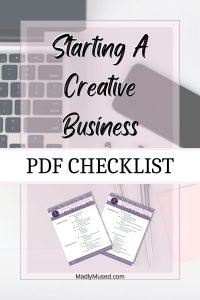 We use cookies on our website to give you the most relevant experience by remembering your preferences and repeat visits. By clicking “Accept”, you consent to the use of ALL the cookies. Read More
Do not sell my personal information.
Cookie SettingsAccept
Manage consent

This website uses cookies to improve your experience while you navigate through the website. Out of these, the cookies that are categorized as necessary are stored on your browser as they are essential for the working of basic functionalities of the website. We also use third-party cookies that help us analyze and understand how you use this website. These cookies will be stored in your browser only with your consent. You also have the option to opt-out of these cookies. But opting out of some of these cookies may affect your browsing experience.
Necessary Always Enabled
Necessary cookies are absolutely essential for the website to function properly. These cookies ensure basic functionalities and security features of the website, anonymously.
Functional
Functional cookies help to perform certain functionalities like sharing the content of the website on social media platforms, collect feedbacks, and other third-party features.
Performance
Performance cookies are used to understand and analyze the key performance indexes of the website which helps in delivering a better user experience for the visitors.
Analytics
Analytical cookies are used to understand how visitors interact with the website. These cookies help provide information on metrics the number of visitors, bounce rate, traffic source, etc.
Advertisement
Advertisement cookies are used to provide visitors with relevant ads and marketing campaigns. These cookies track visitors across websites and collect information to provide customized ads.
Others
Other uncategorized cookies are those that are being analyzed and have not been classified into a category as yet.
SAVE & ACCEPT